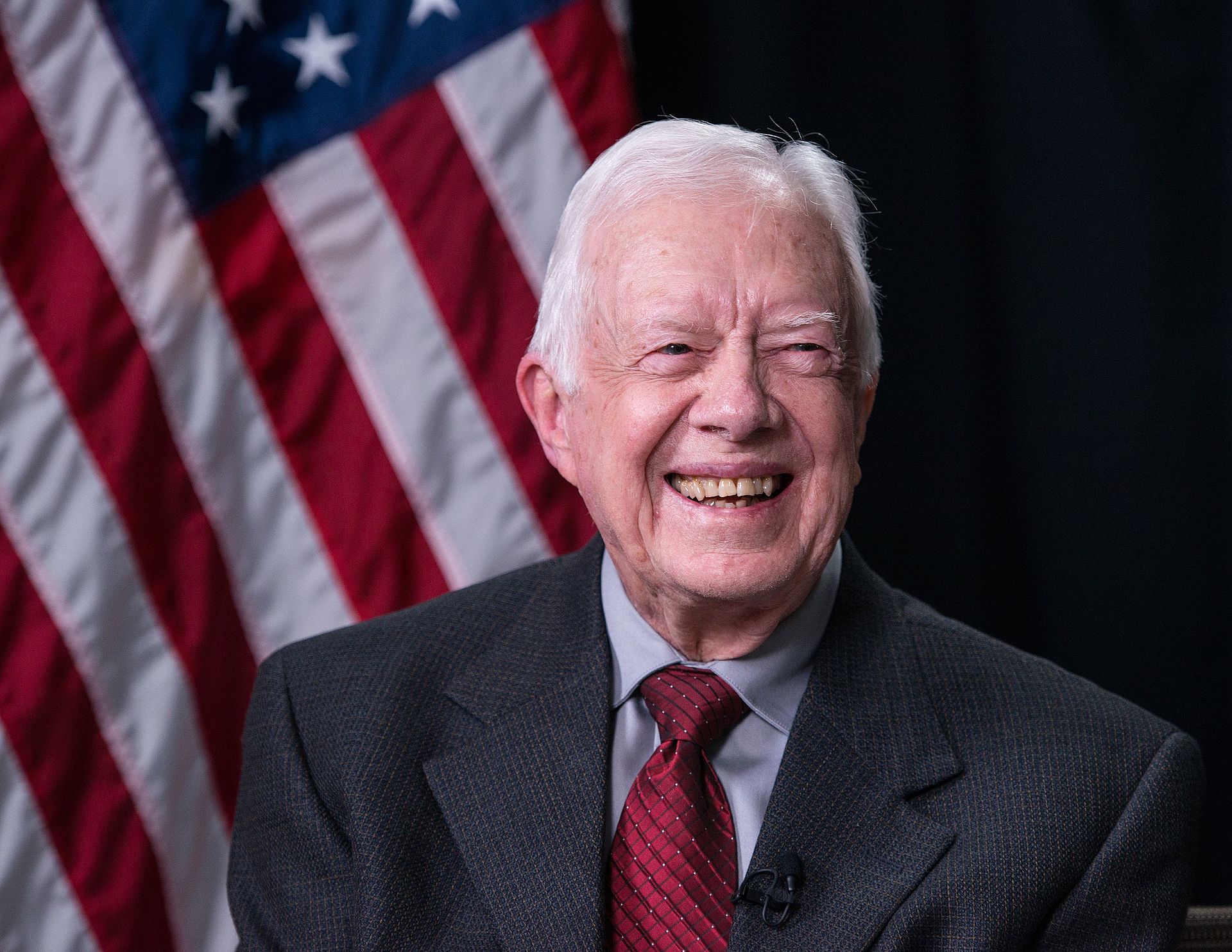 “I never have believed that Jesus Christ would approve of abortions and that was one of the problems I had when I was President, having to uphold Roe v. Wade, and I did everything I could to minimize the need for abortions. I made it easy to adopt children, for instance, who were unwanted and also initiated the program called Women and Infant Children, or WIC, a program that’s still in existence now. But except for the times when a mother’s life is in danger or when a pregnancy is caused by rape or incest I would certainly not or never have approved of any abortions.”

“I’ve signed a public letter calling for the Democratic Party at the next convention to espouse my position on abortion which is to minimize the need, requirement for abortion and limit it only to women whose [lives] are in danger or who are pregnant as a result of rape or incest.

I think if the Democratic Party would adopt that policy that would be acceptable to a lot of people who are now estranged from our party because of the abortion issue.”

I don’t agree with Jimmy Carter’s position on abortion. I actually agree with Ayn Rand, who wrote:

“An embryo has no rights. Rights do not pertain to a potential, only to an actual being. A child cannot acquire any rights until it is born. The living take precedence over the not-yet-living (or the unborn). Abortion is a moral right—which should be left to the sole discretion of the woman involved; morally, nothing other than her wish in the matter is to be considered. Who can conceivably have the right to dictate to her what disposition she is to make of the functions of her own body?”

However, I have to “respect” Jimmy Carter’s consistency. Carter, unlike Ayn Rand but like all liberals and Democrats, favors a welfare state in which government forces some to be responsible for others. For example, Carter believes that government has both the right and responsibility to force people who had nothing to do with a woman’s choice to have a child to pay for that woman’s child. That’s what the WIC program (also supported by Republicans) does.

People ask me, “How can you be a therapist and not be a liberal?” My reply is to project a situation in which a client tells a therapist the following: “My next door neighbor, whom I don’t know very well and don’t especially like, has a seventeen-year-old daughter. This daughter just got pregnant. The neighbor and the daughter knocked on my door and told me I’m responsible for helping them finance this child. I asked them what they were talking about, and they told me that I make a good salary, so I should help them. And they threatened to call the police if I didn’t hand over the money.”

If this scenario took place, I would tell the client, “This neighbor of yours is irrational and completely out of line. Call the police all right, but to inform them of this threat.” I’m willing to bet that just about any psychotherapist who IS a liberal Democrat (most of them are) would say exactly the same thing. The difference between these liberal therapists and myself is that I’m consistent. What applies in the personal context applies in the social and political context. In other words, if an everyday person says something that’s plainly irrational, it doesn’t suddenly become rational just because a politician or government official says so.

It should be made illegal, other than in the case of a rape or incest.

Jimmy Carter wants his Christian ideology to be imposed on everyone, across the board. I oppose the religious right. But how is the religious left any better, or any different? Both support tyranny.

I don’t understand why more Democrats don’t take Carter’s position. Many liberals will disagree with Carter on abortion, but they’re happy to impose their moral judgments on others in just about every other circumstance: What you eat, how much you save for retirement, how much profit you keep if you’re successful, whether you can build on your own property if endangered insects or rodents reside there…the list of what liberals seek to control is literally limitless. Why not reproduction too?

Jimmy Carter is consistent. Just as he holds the opinion that abortion is wrong, he also subscribes to the ethical claim that we are all our brother’s keepers. It’s America, and of course he’s entitled to that position. He’s entitled to practice that philosophy, and to be fair, he has spent some of his private life making efforts to do so. At the same time, he wants to impose this philosophy on the masses. He wants everyone to practice the approach to ethics implied by the crazy neighbor in my bizarre example. “You make more money than I do. Hand over some of it to take care of my pregnant daughter — or else.” Why or how is it any different when Obama, the IRS, Mitt Romney or some billionaire Hollywood celebrity fighting for the expansion of the welfare state advocate the same thing?

“Liberal” in the original sense of the term referred to a philosophy of government and society in which people were left alone. Government was only to intervene when and if a person physically threatened another, or broke a legally binding and voluntarily entered into contract. Today’s liberals (and conservatives too) love to talk of a “social contract.” A social contract is a contract which you’re born into, that you never asked for, and that was indeed imposed on you the moment you were born (nine months before you’re born, if Jimmy Carter and Rick Santorum get their way). It’s not a contract into which you’re allowed to voluntarily enter, or decline. In other words, it’s not a contract at all.

Jimmy Carter is the only high-profile and consistent advocate of a social contract. He says you’re everyone’s keeper, under the law, whether you choose to be, or not. He might not advocate your neighbor showing up on your doorstep and demanding that you give her money, merely because you have more than she does. But he does advocate your neighbor voting into office someone who will do the same thing, only under the pseudo-respectability of legal authority. He won’t have you tell that woman, “Get lost. How dare you make this claim on me?” Instead he’ll tell her, “Just vote for us. We’ll make sure you get the money, and much more.”

It makes eminent sense that the modern day “liberal” who wants your wallet or pocketbook would likewise claim control over your womb, your genitals, or anything else pertaining to your body and mind. Jimmy Carter sees nothing wrong with this. It’s late in his life, and he’s not afraid to finally admit the truth. That he favors total dictatorship, not just partial.

— Dr. Michael Hurd is a psychotherapist, life coach and author of “Bad Therapy, Good Therapy (And How to Tell the Difference)” and “Grow Up America!” Visit his website at: www.DrHurd.com.

previousVideo: Pregnancy By Rape is a Gift From God?
nextLaunched our new site